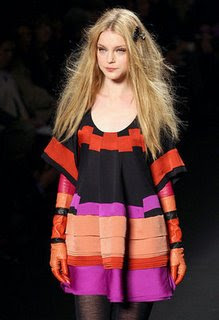 The so-called 'Queen of Knits', Sonia Rykiel is synonymous with Paris. Born in the city in 1930, she went on to encapsulate Parisian style with her chic fashion line. As an expectant mother, she had discovered that there were no sweaters available that were soft and flexible enough for her to wear through her pregnancy, so, in 1962, she created her own line of knitwear. This was so successful that she opened her first boutique in that momentous Parisian year, 1968. And, in their own way, Rykiel's designs were revolutionary. Her flattering knits -often in what was to become her trademark stripes - symbolised liberation for women's bodies from the stiff silhouette of the previous decade. She also increased the sex appeal of knits: freed from linings and hems, her dresses and sweaters were like second skins for the women who wore them.
Rykiel has continued to build her very own French Empire since the '70s. She recognised the wisdom of establishing a beauty line early on, launching a perfume in 1978 and cosmetics in 1987. Completely independent, Rykiel's business is very much a family affair. Husband Simon Bernstein is her business partner and daughter Nathalie Rykiel has been involved in the company since 1975. With such support, Sonia has the freedom to do other things.
Today, Madame Rykiel is something of a French institution. She has written novels, decorated hotels, sung a duet with Malcolm McLaren and even had a rose named after her. And the accolades keep on coming. Rykiel has been awarded an Oscar by Fashion Group International and in December 2001, the French government named her Commandeur de l'Ordre National du Merite. Now in her seventies, the grande dame of French fashion shows no signs of giving up. She has an army of sweater-loving women depending on her, after all.
Posted by Unknown at 10:58 AM